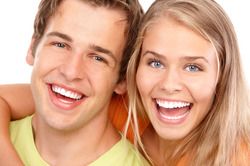 Tooth-colored fillings are the popular choice today when you need a cavity filled. But what if you have old amalgam fillings?

With the concerns about mercury in amalgam fillings as well as the unattractive appearance of these metal fillings, many of our patients wonder if they should replace their amalgam ones with tooth-colored composite fillings.

In some cases, such as when an amalgam filling is showing signs of failing, there is no question that the filling should be replaced. But, if the filling is stable, then the answer may come down to personal preference.

Cosmetic dentist Timothy S. Messer, with offices in Memphis, can explain the benefits of tooth-colored fillings as well as examine your amalgam fillings for signs of failure. Unstable fillings give decay a foothold so they should be replaced. This would be an ideal time to swap out amalgam fillings with more attractive tooth-colored ones. However, if your tooth is now suffering from advanced decay, Dr. Messer can recommend a more appropriate restoration, such as porcelain crowns.

However, if your amalgam fillings are still doing their job, you should discuss the pros and cons of removing them with your dentist.  Dr. Messer can assess your teeth and explain the condition of your fillings so that you can make an informed choice.

The Food and Drug Administration (FDA) does not recommend removing metal fillings unless it is necessary because the process can cause more harm to the tooth. However, if your fillings are old, it may be an opportune time to replace them with composite fillings.

If you are concerned about metal fillings, you should consult a dentist to determine what condition they are in. This will help you weigh the benefits of replacing them with tooth-colored fillings. Please call today if you would like guidance.

I have been to several dentists in the Memphis Area and I have finally found THE ONE!! Dr. Messer is the best dentist I have ever been to. I have complete confidence in any procedure that he performs and I can't imagine ever going to any other dentist.

Invisalign®, the Invisalign logo, and iTero®, among others, are trademarks and/ or service marks of Align Technology, Inc. or one of its subsidiaries or affiliated companies and may be registered in the U.S. and/or other countries.

*Disclaimer: results are not guaranteed, may not be permanent, and can vary per individual. Some images are of models, not actual patients.